Douglas J. Matzke, PhD, was born April 29, 1953, in Green Bay, Wisconsin. Dr. Matzke entered computer engineering and computer science more than fifty years ago, when he started programming in high school in 1968. In college, Dr. Matzke started researching the engineering aspects of metaphysics, because if psi exists, then physics must be expanded to comprehend it. He earned a bachelor’s degree from the University of Wisconsin in 1975 and a master’s degree from the University of Texas in 1980, both in electrical engineering, before earning a doctorate in quantum computing from the University of Texas in 2002. His master’s and doctorate theses were, respectively, Biofeedback Using Home Computers and Quantum Computing Using Geometric Algebra.

From 1976 through 2001, Dr. Matzke worked at Texas Instruments, where he worked on design tools for semiconductor-based computers and helped create the “Lisp Chip,” a DARPA-funded chip that won the prestigious 1987 ISSCC Best Paper award for best chip of the year. After being promoted to TI Senior Member of the Technical Staff in 1990, he was chairman of PhysComp ’92 and PhysComp ’94, two Dallas workshops on physics and computation. He has published more than fifty papers and presentations throughout his career, most notably the lead-off article entitled “Will Physical Scalability Sabotage Performance Gains?” for the 1997 Computer Magazine special issue on Billion Transistor Processors.

Starting in 2001, Dr. Matzke worked at Lawrence Technologies as principle investigator for $1 million SBIR contracts on quantum and neural computing. Overall, he received eight issued patents, including some on high-dimensional math-based neural networks and the intersection of quantum and correlithm neural computing. Since 2006, Dr. Matzke has been employed full-time creating advanced applications using the Python programming language.

On the personal side, Dr. Matzke spent the mid-1990s helping to market Dr. Yuri Kronos’s “Vital Energy Tapes,” which had been filled with prana. During the 2000s, he trained in multiple subtle energy modalities and graduated in 2010 with the certificate of Master Practitioner in Neural Linguistic Programming (NLP). Since 2010, in his personal time, he continued to research the use of geometric algebra for quantum computing as related to the Standard Model, entanglement, Higgs boson, dark energy, and dark matter. He regularly lectures at conferences on quantum computing, geometric algebra, hyperdimensional math, quantum mind, quantum thoughts, and metaphysics topics, while creating YouTube videos of some of those lectures. He meditates and has taken yoga classes for many years. He has been singing for twenty-five years with the thirteen-time international men’s chorus champion of Dallas, The Vocal Majority Chorus. 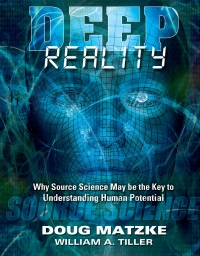